From Basketball to Buddhism: Jim’s journey

This episode of the Wisdom Podcast features James B. Apple, Professor of Buddhist Studies at the University of Calgary. James’ research focuses upon critical analysis of Mahāyāna sūtras and topics within Indian and Tibetan Buddhist scholasticism. His numerous books and articles include Stairway to Nirvāṇa, A Stairway taken by the Lucid, Jewels of the Middle Way, Atiśa Dīpaṃkara Illuminator of the Awakened Mind, and An Old Tibetan Dunhuang Manuscript of the Avaivartikacakrasūtra.

In this episode, host Daniel Aitken and James discuss

James Apple, “one of the foremost scholars of Atisha and his works.” 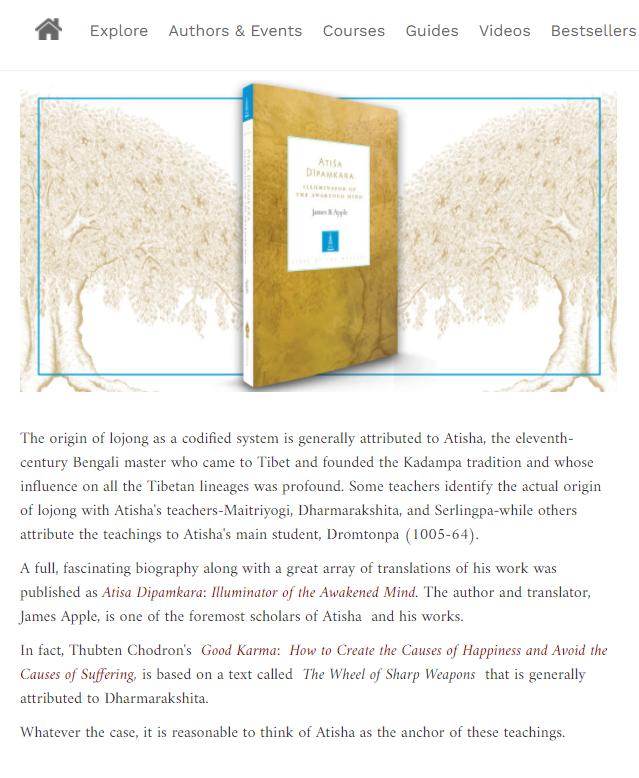 A review of Atisa Dipamkara by Dr. Renee L Ford in Himalaya, Fall 2021

In the Fall 2021 issue of Himalaya, Vol 40, Number 2, pp 159-160,
Renee L Ford published a detailed and illuminating review of Atisa
Dipamkara: Illuminator of the Awakened Mind. She succinctly explains
the book’s organization and reviews the concepts and structure.
Dr. Ford is a part-time lecturer at the University of North Carolina
at Wilmington and a project assistant for The Oral History of
Tibetan Studies at the University of Oxford.  The link is below: 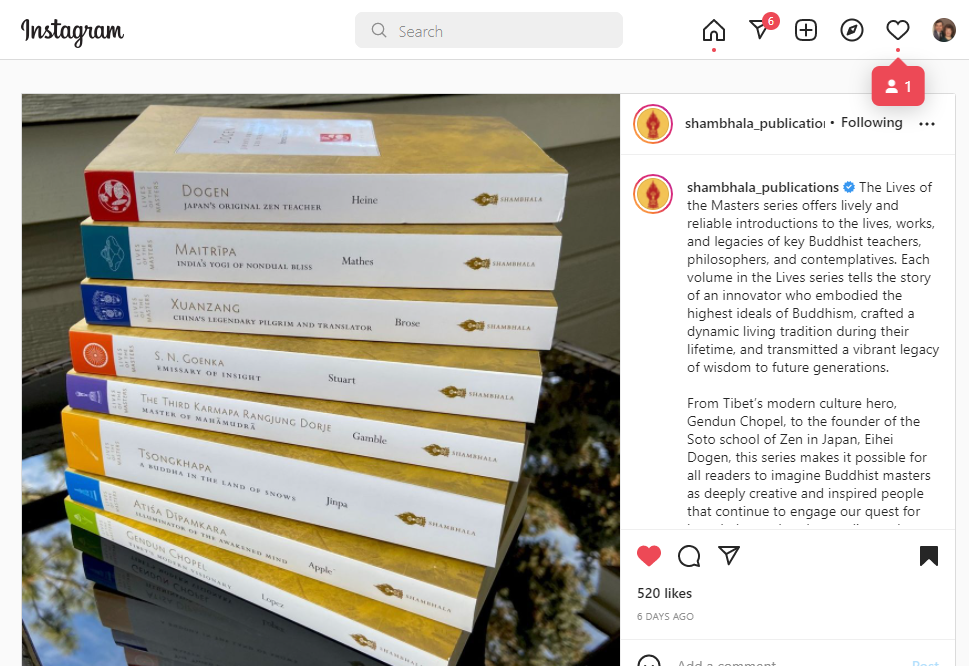 Dr James B Apple’s new book,  An Old Tibetan Dunhuang Manuscript of the Avaivartikacakrasūtra in the Stein Collection collated with Tibetan Kanjurshas, been published by The Revue d’Etudes Tibétaines and can be downloaded from…

This philological study presents a collation of Old Tibetan Dunhuang fragments of the Avaivartikacakrasūtra compared against a text-critical edition of Tibetan Kanjurs.2 The Avaivartikacakrasūtra is a Mahāyāna Buddhist discourse that describes how bodhisattvas become irreversible (avaivartika) from perfect Buddhahood and how they achieve irreversible bodhisattva status, a prestigious attainment among Mahāyāna Buddhist movements in South, Central, and East Asia. Although previously unstudied, this prominent scripture is one of the most influential of Mahāyāna sūtras in Buddhist culture, preserved and transmitted in South, Central, and East Asia over many centuries. The importance of this sūtra is demonstrated by its active citation in indigenous Indian and Tibetan commentaries on the bodhisattva path from the 2nd century in India up through the present day in Tibetan Buddhist communities (Apple 2013a). Analysis of the Old Tibetan Dunhuang Avaivartikacakrasūtra provides a number of valuable contributions to the study of the formations of Mahāyāna Buddhism, to the understanding of Old Tibetan language, and to the systematic study of Tibetan Kanjurs. Enhancing the scholarly knowledge of the transmission history of the Tibetan collected teachings of the Buddha (Kanjur), this monograph contributes to the philological study of Tibetan Buddhist canonical texts and traces the genealogical development of the Tibetan language in translating Indian Buddhist canonical texts.

Analysis of the Old Tibetan Dunhuang Avaivartikacakrasūtra provides a number of valuable contributions to the study of the formations of Mahāyāna Buddhism, to the understanding of Old Tibetan language, and to the systematic study of Tibetan Kanjurs. Enhancing the scholarly knowledge of the transmission history of the Tibetan collected teachings of the Buddha (Kanjur), this monograph contributes to the philological study of Tibetan Buddhist canonical texts and traces the genealogical development of the Tibetan language in translating Indian Buddhist canonical texts. Examination of the Old Tibetan Dunhuang Avaivartikacakrasūtra contributes to the philological study of Tibetan Buddhist canonical texts and sheds light on their historical development. As the Indic version of the sūtra is no longer extant, the philological basis for the present study is a Tibetan Dunhuang manuscript found in two separate fragments within the Stein collection. The primary fragment, IOL Tib J 53, is the longest and one of the earliest Tibetan Mahāyāna sūtra fragments (No. 53, La Vallée Poussin 1962) preserved from the ancient Central Asian city-state of Dunhuang (pre. 9th century). Currently preserved in the British Library, the fragment belongs to a manuscript that was acquired during the second Central Asia expedition (1907) of Aurel Stein (1862-1943) to Dunhuang (Stein 1921). The other Tibetan fragment of this sūtra, IOL Tib J 297, is also found in the Stein collection, but was previously unidentified. The current study correctly identifies the fragment as belonging to the same manuscript as IOL Tib J 53.

This study of the Old Tibetan Dunhuang version of the Avaivartikadharmacakrasūtra1 (“The Discourse on Irreversibility”) had its beginnings while I was researching as a Ph.D. graduate student at the University of Wisconsin-Madison (2001) and while writing my first book Stairway to Nirvāṇa (2008). While writing that book I became aware of a significant, yet previously unstudied, Mahāyāna scripture, the Avaivartikadharmacakrasūtra. In conducting brief, early stage research on this sūtra, I remember a catalog notice by La Vallée Poussin (1962) stating that a Dunhuang fragment of the Tibetan version of the sūtra was preserved in the Stein Collection of the British Library. I thought this was interesting at the time, but I never thought I would have the opportunity or resources to ever see or study the manuscript. Years later when I landed a tenure-track position at the University of Calgary in 2008, I had the opportunity to apply for competitive grants to further my program of research and publication. In 2010 I was awarded an internal University of Calgary Seed Grant that became the basis for a national Social Sciences and Humanities Research Council of Canada (SSHRC) grant from 2011- 2014. The title for the awarded project was “The Restoration of Mahāyāna Sūtra Literature: A Critical Edition of the Tibetan Version of the Avaivartikadharmacakra sūtra with an annotated English translation.” The funds from these grants enabled for the travel and resources to research, and now publish, the following study on the Old Tibetan Dunhuang version of this important sūtra.

The funds from the initial University of Calgary internal grant enabled me to travel to Hachioji, Japan and reside as a research fellow at the International Research Institute for Advanced Buddhology (IRIAB) at Soka University from May to June 2010. At IRIAB I had the opportunity to consult and meet in several sessions the redoubtable, erudite, and now lamented, Seishi Karashima (1958-2019). In fact, it was Karashima-sensei who encouraged me to initially review the Old Tibetan Dunhuang version of the sūtra which IRIAB happened to have on microfilm. The microfilm was not always clear in a number of places and had smudges throughout the document. Working on the manuscript contained in the microfilm did not initially progress well. Nevertheless, Karashima-sensei encouraged me to seek out other exemplars in Japan, such as the Tokyo Manuscript (T) kept at the Tōyō Bunko and a version of the Kanjur kept at Ōtani University. Karashima-sensei also made a number of suggestions for the structure and format of the study of the manuscript. He suggested a line by line comparison of the Dunhuang manuscript collated with various Kanjurs as exemplified in his own studies on the Old Tibetan version of the Lotus Sūtra (Karashima 2005-2008). In the spring of 2012, I wrote to Sam Van Schaik, IDP Project Manager of the British Library, to sponsor and arrange for the digitalization of the IOL Tib J 53 images in the online database of the International Dunhuang Project (http://idp.bl.uk/). I thank Dr. Van Schaik for his efforts to make IOL Tib J 53 digitally available. Mihai Derbac (University of Calgary, Ph.D. 2019) served as a research assistant to the project from 2011 to 2014. He greatly contributed to collation, transcription, and the procedures for phylogenetic analysis of Tibetan canonical documents (for which see Derbac 2019, 69-186). I thank him for all his efforts with this project. Shinobu A. Apple and I carried out research on Dunhuang Tibetan and Chinese manuscripts from August 24, 2014 to September 3, 2014 in Paris, France and London, England. From August 24 to August 28, 2014 we carried out research at the Bibliothéque Nationale de France in Paris, France. I would like to thank Dr. Nathalie Monnet, Conservateur en chef, Chargée des manuscrits de Dunhuang et des fonds chinois, for her support and assistance while we were in Paris. I viewed IOL Tib J 53 and IOL Tib J 297 in person at the British Library from August 29 to September 3, 2014. Viewing the Tibetan Dunhuang fragments at the British Library was a culmination of gathering data for the project. This opportunity was decisive for discerning many features and readings of the manuscript fragments that were not conclusive even through digitalization. I was able to completely examine IOL Tib J 53 and IOL Tib J 297 line by line and improve upon a number of readings in the edition of the text. I thank the British Library for granting me research access to the fragments.